Gemstone of the Month: Garnet

Here are our top three reasons to have garnets in your jewelry box:

1. More Unique Than You Think

You probably picture a deep red gemstone while thinking of garnet, and you wouldn’t be incorrect. Red garnets do have a long history and are abundant, but garnet does not actually refer to just one gemstone. Garnet is actually a set of closely related minerals forming a group, with gemstones in almost every color.

When it comes to garnets, there is a much richer palette of colors available than you may have known, including greens, oranges, pinkish oranges, deeply saturated purplish reds, and even some blues. There are more than 20 garnet species, but there are just five that are commercially important as gemstones: pyrope, almandine, spessartine, grossular, and andradite. Each of these species then has its own set of varieties.

This may seem a bit overwhelming, but it’s easier if you think of these different species by color. Pyrope and almandine range from purple to orangey red. Spessartine comes in a variety of oranges. Andradite comes in yellow and yellowish green. Grossular has the widest color range though, which ranges from completely colorless to yellow to oranges to reds and even to a strong, vibrant green. The specific color varieties are each differentiated with their own names.

For example, rhodolite is a purpleish red variety of pyrope and almandine garnets. Tsavorite is deep green grossular. Demantoid is a green andradite, which displays dispersion and is prized by collectors. Dispersion, also known as a gemstone’s “fire,” describes the visual effect of the colors of the rainbow coming through when white light hits a finely cut gem, and the wavelengths are then dispersed separately.

The range of colors makes garnets a good fit for just about any style of jewelry, but there is a lot more than color that makes them versatile.

Garnets come in all shapes and weights, depending on the variety. Demantoid and tsavorite are most often found in smaller sizes in the rough, so their value increases quite a bit as size increases. In contrast, almandine and spessartite which can be found in very large crystals, so you are able to get a large and good quality gem for a more affordable price. 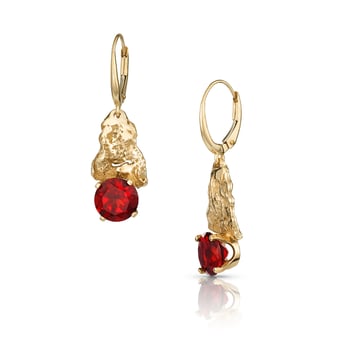 The variability in size and affordability of the red varieties of garnet allow lapidaries to get creative and try designer cuts and more unique shapes. With the rarer varieties, they will usually cut the gem in a way that will retain as much of the carat weight as possible. Even though this may seem limiting, it can make for some unique and beautiful cuts.

Because of their versatility, we can use garnets in every collection we make. They look great against natural textures or alongside high polish ribbons and can pair with any precious metal to create a beautiful piece of jewelry.

Garnet can translate the colors of fall perfectly into your jewelry. The reds, oranges, and yellows of the pyrope, almandine, and spessartine species perfectly mimic the natural beauty of changing leaves, and a pop of the deep green tsavorite can add an evergreen accent.

Any of these beautiful varieties of garnet beautifully pair with yellow gold for a stunning, autumnal color combination. Whether you’re thinking of a pumpkin spice vibe or an aspen leaves aesthetic, you can’t go wrong with garnet for fall.